With a 2nd win over the LA Dodgers on Wednesday, 4/22/2009, three notable trends are emerging:

1)  The Astros offense is waking from its slumber.  All but Matsui and Berkman are playing below their potential.  This is good news if the slope of the curve continues to move upward.

2)  Roy Oswalt is struggling.  It’s difficult to hear your ace pitcher, when evaluating his performance use words like “I could care less” and “…so it doesn’t matter what I do.”  Agreed these words are taken out of context, but it illustrates my point that Oswalt is not in a good place mentally and certainly with respect to his performance on the field.  To be fair, here’s the complete quote from Oswalt and a link for the full context:  “The team battled and we won, so it doesn’t matter what I do. I could care less about my stats, as long as the team wins.”

3)  The bullpen performance is firming, but still not solid.  More solid than Jello.  Maybe more like wet concrete before it sets.  Hawkins did a great job filling in for the bruised Valverde.  Let’s hope the chemical bond in the bullpen binds quickly.

I know that I am a day late.  I’ve been working on my 2009 W-L predictions for the ‘Stros for about a week now.  Just put some finishing touches on it.  The detailed table is below.  Here’s some highlights:

There are some other good 2009 predictions that I have seen.  Take a look at these sites.

Let me know what you think.  MDD

I I haven’t published an entry in a while.  There has been a lot of personal stuff going
on at home and work.  However, it is difficult to let the regular 2009 season dawn this weekend and on Monday, April 6 for the 2009 Astros without some entry on my review of the spring
training season.  Hopefully, I can keep the Astros conversation more frequent in the coming weeks and months.

There
has been enough written about the spring training Astros stats and what those numbers mean for the coming year, so I decided to offer a more personal, maybe even psychological, view on the preseason banter that has been in the media and blog community.  Take a look at a part of my entry just posted on Jose de Jesus Ortiz’s Houston Chronicle blog.
http://blogs.chron.com/baseballblog/archives/2009/04/moehler_magic.html

“But let me offer an opinion
about the coverage and comment on the Astros 2009 spring season.  The predominant preseason prognostications for the 2009 Astros have come from one of two lines of thought:  1) lowering expectations to soften any disappointment at a less than fruitful season, or 2) building a platform of
self-promotion from which one can declare postmortem, “I told you so.”

Neither is attractive to
me.  I appreciate your realistic AND positive perspective in your reporting and blogging.  Your outlook helps me to enjoy the game for the true competition that exists on the field and to remember fondly the joys of sitting behind the plate with my dad in the yellow seats of the Astrodome watching a Sunday home game.”

Do
you have any opinion about the shrill

and caustic content that sometimes sours
your enjoyment of the game of professional baseball?

The shows
airs in the greater Houston, TX market on

both on the Houston Astros broadcasting team,
put together a fun and smart radio
show about baseball trivia and history.
They have a weekly puzzle and have listeners play trivia games on the
air.  They also invite guests from all
aspects of the baseball industry to talk about their careers in baseball.

Every so
often, they answer and discuss questions and topics that come in through email
(jdanddave@gmail.com).  My questions were discussed on the January 7
show.  (I know it was just my
questions.  I wasn’t really on the air,
but it was fun hearing my name called out.)

You can
hear the segment on the podcast of the show.
The exact time stamp of the segment is 11 minutes and 10 seconds into
the show with the segment ending at the 17-minute mark.

For more
information on J. D. and Dave’s show and to subscribe to the podcast, see the links
below.

2. Drayton McLane Should Swing for the Playoffs 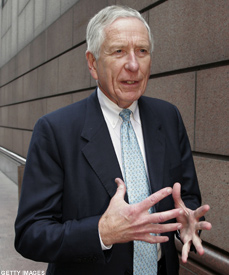 than his fair share of advice about how he should be equipping Ed Wade,
Astros General Manager, and the baseball operations staff with the resources
and strategic objectives that they need to field a team in 2009.

So far
they have stood firm at a payroll number that’s upward of $105 million.  Ed Wade has said that 2009 revenue projections don’t cover
the player salaries based on current contract obligations.

So why
recommend more deficit spending during a horrific economy with payroll numbers
higher than most, if not all, previous seasons.  Here’s my logic:

So, Mr.
McLane, dig deep for some dollars to put at risk.  Yes, it’s a gamble, but high risk can bring big rewards.  Give Wade and staff what it takes to go out
and find some great starting pitching at what could be a pretty good price. 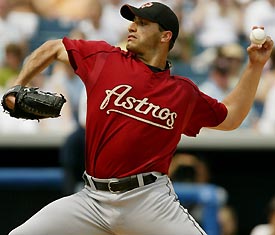 Step over the sins of the
past years, and put him in the fourth or fifth rotation
slot.  Give him a deal
similar to Backe’s where innings count for big bonuses.

Or sign
Ben Sheets before the Texas Rangers pick him up.

Glavin,
Lieber, Looper, Maddux.  Go get us some
better starting pitchers.  If you do,
the millions of dollars could be recovered in October with playoff and
merchandise revenues.

What do
you think?  Stand pat?  Take the risk?  Who would you sign? 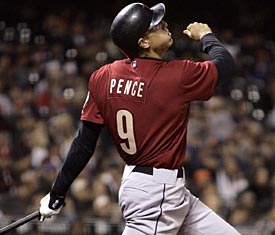 Hunter
Pence’s sophomore year in the major leagues dealt him a hand flooded with
variegated pitching strategies.  The pitchers were tossing mostly
sliders that too often were irresistible for Hunter to just let bounce into
the dirt.

Pence
struggled most of the year as pitchers schooled themselves on video footage of
him chasing sliders with predictable ineffectiveness.

All
of this yielded less offensive production from Pence compared to his rookie
season, which could have been an award winning season if
he could have stayed healthy.  (Click
here for a graph
comparing Pence’s batting average in the 2007 and 2008 seasons.)

Pence is working on picking up the slider by conducting a series of eye
movement and focus exercises.  Hunter said in a radio interview
(12/17/2008) with Jim Deshaies and Dave Raymond (click here: to
download a podcast of the interview) that he is making the visual acuity
activities a big part of his off-season preparation.

With Wiggington gone and the aging Tejada’s plate production expected to
continue its wane, the Astros need a solid offensive year from Hunter
Pence.
I think he’ll create better plate appearances by bolstering by his
ability to see the slider. 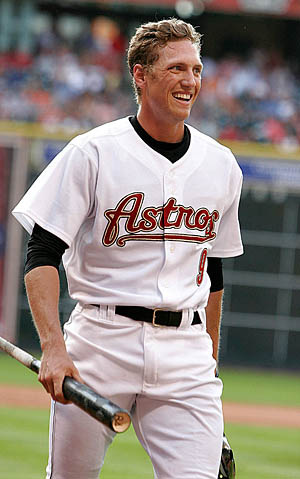 What
else should we expect from Hunter Pence in the 2009 season?

Are there other Astros making important adjustments that have the chance to
improve the team’s overall performance?

Let me know what you think.

Ed Wade and staff have been consistently chipping at the team’s 40-man roster over the past few weeks.  Every few days another strike of the negotiating chisel shapes the block of players that will report to training camp in less than 2 months.

Going into the Winter Meetings, it looked like we would be trading Tejada or Wiggington for a 2nd slot starting picture, but it turns out we just deepened the bench in the outfield, the bullpen, and in the infield to replace the non-tendered Ty Wiggington.

Mike Hampton could be a pillar for the pitching staff if he stays healthy and pitches like he did in September. (Click here for his 2008 stats: Hampton 2008).

I believe Backe and Rodriguez still have a career-defining season somewhere inside, but  I am not sure that Mohler can carve out a repeat performance in the coming year.

I would like to hear your ideas and thoughts about the Astros starting rotation for 2009 and how it is shaping up so far.  Do we have a chance to get another proven 1st or 2nd tier pitcher before the Hot Stove season is over?